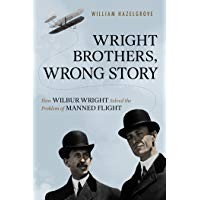 Just Released Book (Dec 4) Wright Brothers Wrong Story points to Wilbur Wright as the Man who Invented Flight with his brother Orville changing history to claim credit. Smithsonian brings new thesis on Wright Brothers Historic Flight to light.
A new book has turned aviation upside down with amazing reviews https://www.kirkusreviews.com/book-reviews/william-hazelgrove/wright-brothers-wrong-story and a full write-up in the Smithsonian Magazine https://www.smithsonianmag.com/smithsonian-institution/why-wilbur-wright-deserves-bulk-credit-first-flight-180970714 with the assertion that Wilbur Wright was the man responsible for inventing the first plane capable of powered flight.
Bestselling Author William Hazelgrove's http://williamhazelgrove.com new book "Wright Brothers, Wrong Story" has set the assumed belief that the brothers worked in tandem on its head by delving into the papers of Wilbur and Orville Wright and emerging with a very different story than the standard team story of two men who banded together to produce the worlds first airplane. As pointed out in the Daily Mail, https://www.dailymail.co.uk/news/article-6411537/New-book-claims-Orville-Wright-exaggerated-role-invention-flight.html the book explores the family life of the brothers as well and the strange proclivities of the insular Wright children who never left home.

By far the best published work on the Wright brothers' personal and professional lives. Thought-provoking and controversial in highlighting Wilbur's brilliance in aeronautics and showing how he clearly overshadowed his brother's contribution to manned flight.Alan C. Carey, Author of "We Flew Alone: Men and Missions of the United States Navy's B-24 Liberator Squadrons"

"I wanted to demythologize the Wright Brothers and find out who these two men were who dropped out of high school, never married, and never left home," Hazelgrove said in a recent interview. The book has been making waves in the aviation community that has stuck to the view that both brothers equally created the worlds first plane. "What people don't understand is this was Wilbur's dream and that he solved the head-cracking physics of flight and he went down to Kitty Hawk alone initially... it was his plane first and last."
The book is released by Prometheus Books and available everywhere.
Posted by William Hazelgrove at 6:57 AM