Once upon a time there were two brothers. Everyone said they were the same but in fact they were not. The reason people saw them as the same is their father willed it be so. The Bishop was adamant that to the world they must provide a United Front. Their father believed the world to be evil and he wanted his children to stay home and provide him with a home when he returned from his travels. So Wilbur Katherine and Orville did just that. They stayed home their entire adult lives  and kept the Bishop company and presented an equal united front to the world.

But Wilbur was different. He was smashed in the mouth with a hockey stick by a future mass murderer and went into a three year depression. By the end he wanted to fly. His brother had no real interest in flight and was happy to continue making bicycles. But Wilbur read everything and then contacted the Smithsonian and then the weather bureau to find out where the winds blew constantly. He then built his own kite flyer and flew outside of Dayton. He knew then that he was onto something and went down to Kitty Hawk North Carolina with a gilder he built. He went alone.

But Orville would join him and watch Wilbur fly his gliders for two years. By 1902 Orville tried the gliders and crashed  but to the world they were now the Wright Brothers and nothing would change this. Even when Wilbur presented his findings to engineers in Chicago and had a five hundred letter correspondence with Octave Chanute where he worked out the physics of flight. Orville was not part of any of this but a photo on Dec 17 1903 showed him flying and not Wilbur. From then on it was assumed they both invented the first plane. All the books said so... 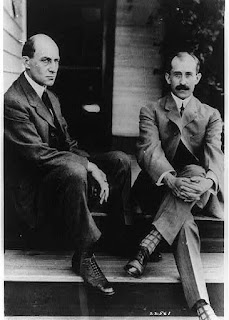 Posted by William Hazelgrove at 7:38 AM