When I was a kid living in Virginia my parents go to vacation was Kitty Hawk North Carolina. It provided for my parents that sense of getting away from it all in a rustic cottage along the eastern seaboard. For me it was hell. Isolation. Sand dunes. I spent many days mooning about the beach wondering when I could return to my all important life in Richmond and then Baltimore. But one of the offshoots or rituals of our trip was a sojourn to see the Wright Brother Memorial in Kill Devil Hills.

We would drive up the hill and look at the monolith that is the Wright Memorial and then at the manikins they had in some sheds and then a replica of the 1903 Flyer and then we would trek down to the all important track marked where each of the three flights occurred that day Dec 17 1903. I would like to say I was lit on fire with what had occurred on those cold December days but it was another trip to another hot place that I had to endure. Still, there was a glimmer of curiosity. Something about those markers under the hot Carolina sun...the absolute isolation...who would come here to fly? And really, who were these two guys in ties and vests from Dayton Ohio.

Many years later I returned to research my book Wright Brothers Wrong Story with the same question. Who were the two high school drops outs who ran a bike shop and had cracked the rubicon of flight. I had read McCullough's book and it left me flat. I still didn't know who they were. They were still historical stick figures leaking sawdust from every pore. Who were they as human beings...that started me on the road that led me back to Kitty Hawk NC and it was here I realized the wrong story had been told ever since 1903.

I would attempt to tell the Wright Story. 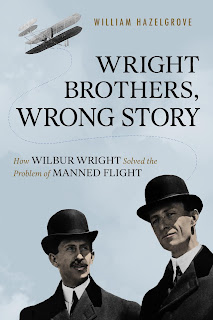 Posted by William Hazelgrove at 8:07 AM