A lot of talk of using the 25th amendment against Trump but the truth is that will be difficult.  It wouldn't have worked against Woodrow Wilson either. It wasn't passed until after Kennedy was assassinated but Woodrow Wilson is the closest we have to a Trump situation. Wilson had a stroke, was paralyzed and could barely put five sentences together. His wife, doctor, and Chief of Staff came up with a plan to hide him away and let Edith Wilson run the government. They pulled it off all the way to the end of his term and basically it was the best kept secret until recently.

Secretary Tumulty said  no. He said "not while the President is flat on his back." And then Lansing asked Grayson if he would certify that the President was too sick to carry on the duties of President. Grayson shook his head and said absolutely not. And then Tumulty issued a warning that he would let the President know who was trying to remove him. The cabinet meeting ended with the full cabinet wishing the President a speedy recovery.  Lansing would later be fired and in no small part because Edith and the President never forgave him for his treachery.

It is not so simple to remove a sitting President....even when they are paralyzed and bedridden and their wife is running the country. 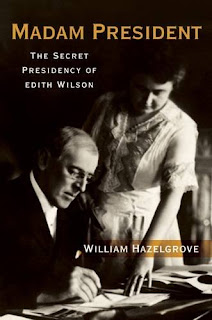 Posted by William Hazelgrove at 3:21 PM