When I was a boy in Richmond Virginia they were there. Lee was on his horse and further down Monument Avenue was Stonewall Jackson, Jeb Stuart and then later Arthur Ashe. Arthur was added in  1995. He was from Richmond and after much controversy he made it onto Monument Avenue with the bearded generals. But as a boy I was in awe of the Generals on their horses. Southern boys saw the Civil War as little gray soldiers that were lined up against little blue soldiers. My great grandmother lived on Monument Avenue and I remember going to her dark and brooding grey-stone that felt like 1865 and then going to see Gone with the Wind. I saw that movie probably a hundred time with different relatives. It was the living bible for many Southerners and I probably read the book fifty times.


But then my family moved North to Chicago and it wouldn't be until a book tour for my book Tobacco Sticks  that I saw the generals again. They were there tarnished and old and now facing a revered tennis player. I didn't give it much thought then. I had written a novel about a young black woman wrongly accused in 1945 and I had studied race relations in the South for a long time. The South belonged to the past and the statues belonged to the past. F Scott Fitzgerald famously said "poetry is a Northern mans dream of the South." He had married a Southern girl and would write "Last of the Belles" and try and get his arms around these fleeting images of a world gone by.

So today, Arthur Ashe still faces the generals on Monument Avenue with his racket at the ready as if to say, my game, would you like to go for a set general? It was his game and now he might be the only one left standing. 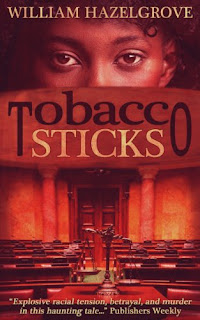 Posted by William Hazelgrove at 8:45 AM