When Jennifer Regan the school librarian texted me to ask if I would speak to a boy who had been  brutally assaulted in a middle school in South Elgin because The Pitcher was his favorite book and she felt if I would go see him in the ICU in the hospital it would lift his spirits... I said sure. I did not know about Henry but then of course I did and was shocked along with everyone else at what happened to this seventh grader. So I spoke with his mother who told me they had come home and would I come to the house. Absolutely.

I did some more research and saw that Anthony Rizzo among others had lent their support in fact it seemed the whole Cubs team was all about supporting Henry. #henrystrong was fast becoming a big twitter feed with people all over the country giving the middle school pitcher encouragement. This would be a first for me. Authors spend most of their time holed up over garages or in attics and then the rest of the time beating the promotion tom tom where you feel akin to an aluminum siding salesman hawking your wares. So this would be nice

Henry was just like any other boy, full of dreams, hopes. We talked baseball, pitching, cubs. I told him the story of how I came to write  The Pitcher which is the story of  a boy with a dream to make the high school baseball team. Henry is almost the same age as Ricky and will be facing that same challenge  soon. And then after signing a book and a poster it was time to go. Much too fast but the family has it's hands full with the many aspects of an event where normal life is put on  hold as media, lawyers, doctors move in.

Little did I know that when I wrote about a boy with everything against him with a single dream to become a pitcher for the Chicago Cubs one day,.. I would meet him in the flesh. Go Henry.
Go #henrystrong. 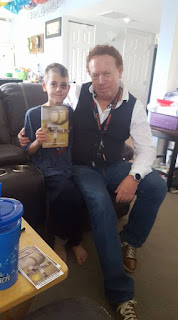 Posted by William Hazelgrove at 8:03 AM