Going to the NATO Demonstration 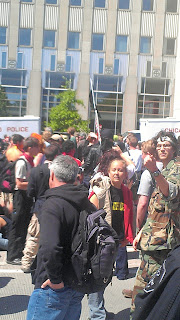 First you ride the train without any backpacks or suitcases or satchels of any kind. No one is on the train on the third day of the NATO Summit. You ride along as a suspicious conductor with SECURITY takes your ticket and then moves on grim faced to scan the car for anything that shouldn't be there. It is bright and sunny and a warm seventy degrees in Chicago but everyone is staying away. More guys with guns and SECURITY on their back sweep through the METRA car and look at you and then your book and then they sweep the car the way the conductor did moments before. This happens every five minutes as you stop at stations with armed men standing at attention like soldiers.

In Chicago you get off with the other silent travelers. Grim. The world is grim today. Something could go off in Ogilvy Station and you hurry past cops and guards and plainclothes men and beat it out of there because you really don't want to be that casualty. Then you start to walk toward the lake where the demonstration is supposed to be. Crossing the Chicago river on foot you realize Chicago is a ghost town. You have never seen the city so empty before on a Monday when people should be bustling from lunch to offices to cabs to bars to restaurants. The few people walk stone faced to their destinations and you wade into the cops on every corner and keep walking East.

Finally you see the squad cars and the humanity. Multicolored people across Michigan Avenue on the North side of Millennium Park. They have blocked off Randolf and you pass through the army of police. You have never seen so many police before.They are all in black with riot vests and guns and masks and there are brown shirted State Cops to back them up and then there are lines of police that cannot be crossed and then are lines of bike police and then there are city buses full of more cops. It is a police convention, a police city. And in the center of all this are the demonstrators. They seem very inconsequential and not a threat at all as they play music and listen to a speaker no one can hear.

You are dressed like someone who is working downtown so you slip between the police and shoot pictures and the silence that hangs over the world is there and you feel like someone could light a fuse and the whole place would blow up. A helicopter shakes the air and hovers overhead. A man with one shoe calls out to the cops who don't move. They just stand there as human warnings. And it works. The demonstration is more like Halloween, people playing at demonstrating. So you slip through the cop lines and take more pictures of cops, demonstrators, the ACLU observers in green hats, the bicycle cops, the state cops, the black shirted paramilitary cops. The air doesn't move and everyone just waits. Waits for something to happen.

But nothing does. Eventually you have a train to catch. A girls softball game with your daughter. You hurry back to the train and ride home with the commuters. No one talks. The Security Sweeps don't happen. The NATO Summit has ended. You show the photos around to your friends and they ask if you were there. Yeah, I was there you say, and even then you aren't quite sure you aren't lying.