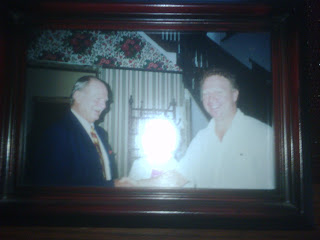 One day I was working in the attic when Virginia Cassen the head of the Hemingway Foundation said to come on down. I had been in the attic for about five years and had gotten used to the tourists who went through the home and was more than glad to say a few words about writing in the attic. When I came down the stairs there was a man in a blue blazer and tie. He was bald with a thin mustache and was laughing at something when Virginia said, Bill, this is Jack Hemingway, Ernest's oldest son.


Now I had read all of the short stories of Hemingway's early years in Paris. Up in Michigan, Fathers and Sons, Cat in the Rain, My Old Man, The Doctors Wife and in some of the stories there was his son. At the end of A Moveable Feast Hemingway described seeing his son at the train station, "blond and chunky and with winter cheeks looking like a good Voralberg boy." He was either giving him a bottle while he wrote or meeting him with Hadley his first wife to go skiing in the Alps or going fishing. "Bumby" was his son during the happy years, the apprentice years of learning fiction in Paris and if Ernest ever had a time when his family was together it was during those first five years before he and Hadley divorced. In this way Jack Hemingway was a living literary character.

And now here was this man with a twinkle in his eye holding out his hand. He asked how I liked writing in the attic and we made small talk about the difficulties of writing good fiction. Jack was in for a dedication of the Hemingway house and so he didn't have much time for a young writer who had perched in the attic. After shaking his hand one more time and a kind "good luck with your writing "he left to get interviewed by a waiting camera crew. I returned to the attic.

Now it is ten years later and I haven't really thought about Jack much who died in 2000. His daughter Mariel Hemingway went on to fame and fortune, but Jack had a quieter life, working as a salesman, stockbroker, conservationist after serving in WWII. But you do have glimmers of people. His picture sits on my mantle, a moment in time. There was something about his rumbling laugh and the ready smile, some sort of heightened sensitivity to life that surely his father carried. It's hard to peg meeting someone connected to a legend and you sure don't want to over do it. The man who valued "one true sentence": would hate it if I summed up our brief meeting and said anything more than: I met Ernest Hemingway's son and he seemed like a great guy.

Rocket Man will be out in January
Posted by William Hazelgrove at 5:40 AM