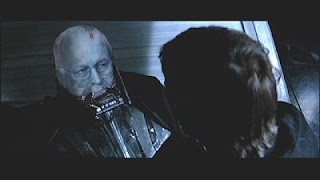 Imagine if Darth Vador never died in Star Wars. What if Luke Skywalker's light saber didn't work so well and Darth survived but without his helmet and powers. As Princess Leia and Luke and Hans Solo went on with their lives they would have this echo following them around. "Ah...I really don't see what you are doing to protect us from the Klingons." At first it might be a little annoying, having this guy in a black cape without a helmet chasing them around, but then it might start to really undermine the regime.
"Hans Solo was a gun runner before he knocked up the Princess and what's that say about her?"
The kingdom citizens would kind of grimace and say well that's just old sour grapes Darth, but after a while the seeds of doubt would begin to take hold. First of all. Darth would get plenty of airtime. I mean he was a major player in the Universe for a long time and though his star has ascended he sort of would enjoy a Nixonian celebrity. "Really Darth, how did you feel when your son slayed you?" Darth would shake his head. "Well, I just don't agree with your assumptions. I wasn't slain, merely bested, and I feel I still have a role to play."
Darth would follow everyone around in later episodes. "I really think Leias economic polices are really disastrous for the galaxy and I have to say she is not taking our security seriously "Soon Darthlings would pop up, people who really believe Vador can make a comeback. They would join Darth on pro Death Star Stations. "You are in the no gravity zone where the spin stops here." And soon it would seem like Darth is representing a consensus opinion among populist space creatures who would start to view Darth as this fallen hero.
Soon all the Star War episodes would be dragged down by this guy who just won't leave. He would screw up all the ploy dynamics for the subsequent episodes. You can only have so many bad guys and the old Darth would be one too many. Soon people would start to confuse the Death Star with the the new Kingdom. It would all finally come to a head in a David Frost interview where Darth is asked why he didn't just leave and go hang out with all the other Death Star Refugees. Darth might look at the camera and shake his head, finally blurting out...I should have been the ruler of the universe...not that skinny pointy headed black guy Me Me Me
Darth Vador!. The war was my idea, the torture, the implosion...but noooo I don't get credit for any of it...I just get a lot of people who make fun of me...snif snif....Darth breaks down and David Frost's ratings soar.
Disgraced, Darth finally leaves to write his memoirs...The Real Darth...the man under the helmet. An instant bestseller.
http://www.billhazelgrove.com/
Posted by William Hazelgrove at 12:51 PM