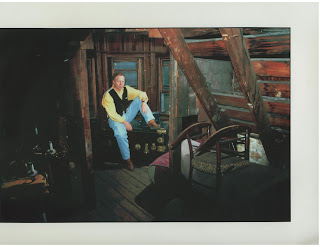 When I was growing up my family was always in debt. We were like the United States is today, always running behind, one step ahead of the rent, the utilities, the milk bill. My dad did the best he could, but he was a traveling salesman and so we were subject to commission checks and the vagaries of an impersonal economy. Some times, when things were really bad and Christmas gifts were being shorted and hot dogs were served again or a vacation was cut then my dad would say to me in the car, "it's only money." He followed this one up with: you are not the sum of your liabilities and assets. We were Southerners with a healthy disregard for capitalism and so I didn't think too much of these epigrams. But now one can glean from those statements all sorts of things. We were all still healthy. No one had died. Somehow we would muddle through to the next check. We always did somehow muddle through and all my brothers and sisters went to college. We never did catch up and to this day my father pays a high price for living in debt. But I can't say I didn't have a happy childhood. Now we are in financial straits that are about as perilous as they can be. OK. So maybe we are in a depression. Maybe the auto companies will fail and the banks will be nationalized. Maybe we will all be eating Mac and Cheese and drinking canned beer again. I don't think there will be rioting in the streets. The government will keep the social programs going and the lights on and the water running. No one will invade us because our 401K's tanked. The military will still have enough missiles and guns and tanks and weapons of mass destruction to keep hostiles away. So what are we afraid of really? Losing our homes, our jobs, our position? Homes and jobs can all be replaced. If you have your health and your family is doing all right then you're Ok. What we really have to deal with is our relation to a currency that for two hundred years has given us our sense of self worth. The Puritans set the bar, if I am rich I am good and if I am poor I am bad. My dad had another phrase: everybody has their day in the pickle barrel. He pulled this one out when I lost a girl, didn't make the team, didn't get a job. The implication was that yes times are bad today, but they will get better. Everybody takes their turn. The pickle barrel is pretty crowded about now, but we'll get out. As my dad said many years ago...it's only money.
Posted by William Hazelgrove at 8:07 AM