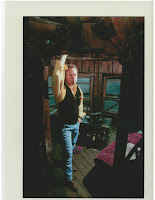 Did you see the New York Post cartoon of the dead monkey shot by the police with the caption: "They'll have to find someone else to write the next stimulus bill. " Hmm....was he mocking the dead chimp that went ballistic on the lady or the President? Depends who you see in the bushes. If you think a major newspaper wanted to compare the President to a dead chimp then you go down the racist path. If you think he was saying the stimulus bill was written by a bunch of idiots akin to an enraged primate then you don't. Or did you hear Eric Holder the new Attorney General say "we are a nation of cowards." Cowards because we don't live together side by side is Holder's contention. He swept away handily the fact we just elected the first African American President. I mean I get it. I get what he is saying, no we don't break break with each other. We do live in segregated areas of the country. In Oak Park Illinois, a very integrated community on the rim of Chicago's West side you see the closest approximation to Holder's vision of America. I lived there nine years and on our street we had black and white families. We all were friends and chatted over fences and waved and did all the things neighbors did. But we didn't hang together. It wasn't because of skin color, it was just that we all had our own friends, social groups, family and these generally break along racial lines. So I get what Eric Holder is saying, but it is not really a matter of not manning the barricades and busting through to the other side, for most people busy with raising children and trying to survive, all we can do is see our friends every now and then and most of the time these friends are social groups predicated on familiarity. Race is a loaded gun and can be pointed both ways and it is sad that election of the first black President doesn't count for much. We still have to tag everything along racial lines. Maybe one day we will get to where a dead monkey laying in the road isnt' a racial slur. Maybe it's just a dead monkey.
Posted by William Hazelgrove at 7:09 AM